Are you tough enough to tame the mighty mighty ……. UltrabeasT?

Yes, the Beast just ain’t big and tough enough for you anymore!  An extra 8 miles on to the Preseli Beast makes this a seriously tough outing!  As if the original wasn’t hard enough for you! 😉 And if the 32mile route doesn’t grab you enough, then what about the 6,000ft of ascent it now has! Be warned this is no easy walk in the park.This is proper hardcore fell running terrain. 😉

Now at Foel Feddau/CP7 there’s an extra cut off point, and anyone arriving here after 15.00hrs would have to run/hobble/shuffle back along the Preseli Beast route. Don’t be too down hearted though as you can still be counted into the Preseli Beast results as you’d have still done an amazing amount of hard work. 🙂

Now an extra 8 miles onto the Beast doesn’t sound too bad, but those who have done the Beast will testify that the terrain probably won’t be an easy 8 miles. In fact it takes in the whole of the Preseli ridge! It also has some cracking singletrack visiting some lovely little rocky tops along its course. This extra bit doesn’t have any wide trailed paths, or any stiles by the way! It’s all pure fell running magic. None of this hard packed stuff. 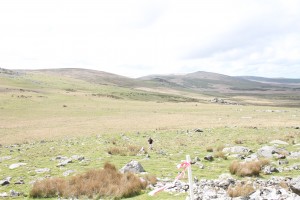 Carn Alw-One of my favourite little tops in the Preselis, and very much off the beaten track.

Looking at the map from a distance it’ll seem as if it’s an out and back, which to some extent it is, but you certainly don’t run on the same paths. On the outward leg to Foel Drygarn in the east, you’ll visit the lovely rocky top Carnalw on the Preselis northern flanks. On the return you’ll run through bluestone country(where the supposedly stonehenge stones came from!) via Carn Menyn, and Carn Bica.

This route really does take it to the extreme and those thinking of running this one really must be physically and mentally prepared.

If you want to take a look at the whole UltrabeasT map then look below. Hopefully the links should bring up a PDF version. Please note that much of the Eastern part to and from Foel Drygarn will not be marked, and that from when you leave the Preseli Beast runners, you can decide whichever way you want to go!!! 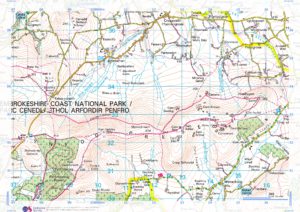 And if you’re on OS maps- OS maps link.

Lastly, you might be wondering why the end of the word ‘UltrabeasT’ has a capital T? Well, the route itself looks like the letter T! Simples!

One Reply to “The UltraBeasT 32 Miles Fell / Off Road”