So, there have been two races so far…….

We had great weather for the first race in April which was won by Aled Jones-Davies(TROTs) in 30:23, some 20 secs in front of Heddwyn Evans(Emlyn flyers/WCT). There was even less of a gap between 3rd placed Jonny Sable( Rhedwyr Preseli) and 6th with only 20 secs between the 4 positions. David Warren(1st M50), who was actually late starting, finished a cracking 5th and might have won overall if he’d have started on time! Jason Wilkins(Cardigan RR was 1st M40 in 7th, whilse M60’s little powerhouse Malcolm Clash(Rhedwyr Preseli) was 10th. He was closely followed by 1st lady Nerys Jones(TROTS)11th, whilst 1st F50 was Helen Williams(TROTs). Carn Ingli killer April results

June’s 2nd race saw brilliant conditions with a sea mist cooling things down over Newport. It warmed up as they climbed up to the summit, with some cracking views over Newport bay…..if you dared to look!. Times were smashed with newbie to the race Alan Latter(Team Cemais) coming in 28:13, whilst Heddwyn was 2nd again but in a better time than previously in 28:23. Heddwyn currently leads overall as he’s done two races so far, but all that could change on the final race. Another newbie to the race was David Cole(WCT) who was actually 1st to the summit, but his off-roading skills weren’t quite fast enough to keep the pack at bay and finished a very credible 3rd in 29:44. Rhedwyr Preseli’s M60’s running man on fire Malcolm Clash came in 6th overall, whilst M50’s TROTs runner Andrew Clement just pipped M40’s Cardigan RR Jason Wilkins for 9th. Only female to run this time around was CardiganRR Jane Wilkins who was 2:40 quicker than her first outing. Carn Ingli killer June ’16

This was the view I had whilst picking up the markers after everyone had eaten all the cake and gone home! 😉

Huge thank you to the helpers and marshals out on the course. These races would not happen without their help.

Last of the three races is on September 14th at 7pm. 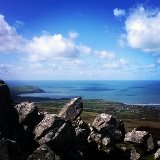