So, were you desolated by the Beast? Did you actually feel as if you tamed it, or do you need to come back for more……….cake?

It’s taken me a while to write this as I was completely wiped out post-race day, and after all the excitement I felt a bit down as it’s all over for another year. So apologies for the lateness of my write up.

The weather on the day was quite warm for the runners, and I think most were glad of all the water stations that were dotted around the route. The UltrabeasT runners would have been very welcome of the 40litres of water that was carried up to Foel Drygarn’s top as nearly all of it went! Although it was warm it couldn’t have been better for the huge army of marshals and helpers, villagers with their hooters and drums, supporters, and I suppose for you runners to enjoy the views…..and to see the markers!

Although this is the fourth year of the event, it doesn’t seem to get any easier as trying to organise each of the three races is quite demanding. From course marking, preparing the finish area, keeping up with late entries and emails, Making sure all the orders for everything are sorted, as well as everything that needs doing on race day itself. One of my biggest headaches is trying keep on top of where all the runners are and if some drop out. So it’s a huge relief when everyone manages to get back for cawl, tea and cake…….even the marshals! 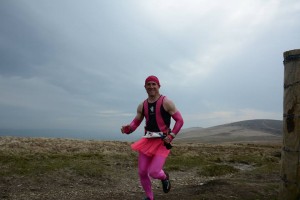 I’ve always wanted to run the race myself, but there’s just too much to organise.  It’s also my job to sort things out if something goes wrong. It must be an amazing feeling being out there encouraged by the many volunteers that really make this event happen. Many of you runners comment on the amazing atmosphere that they feel not only within the village, but whilst out on various parts of the route. So a massive thank you has to go to the marshals and villagers who give you the encouragement you deserve. Another huge thank you has to go to the other army of people who aren’t out there watching you run(suffer!). From tea and cake ladies, providers of the cawl, admin and timekeeping ladies, and also to Roland and Pat for their hardwork in doing the results sheets. My hat goes off you to you all. 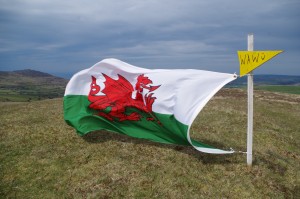 So race day itself saw a total of 311 runners toe the line, which included a superman and a manly pink tutu runner! 62 entrants took up the mighty UltrabeasT which was double the field of last year! Last years winner Gancho Slavov from Aberystwyth AC led from within the first mile, and carried on increasing his lead to finish 28 minutes clear of second placed James Thomas. He also finished in the same time as last year in 4hrs 56mins! Not bad for an over 40! In fact two of his teammates finished 4th and 5th, and took 1st male40 trophy, and 1st male50 trophies respectively! A new lady was to win the Ultra this year with Alli Grundi from Tattenhall runners finishing in 6hrs 4mins. She did have some company early on from Louise Barker from Aber AC.  First locals home were Martin Everett, Narberth and Jane Rees from Clunderwen. Jane finished the same time as Rhedwyr Preseli runner Sanna Duthie as they had both run around together chatting away as if out for a jolly. Sanna took the Open female trophy, and they were closely followed by fellow Rhedwyr Preseli runner Chris Welton from Brynberian. Great to see a total of 8 DDMT runners finish the Ultra with a few of those coming down for their first Beastly experience!

The 24mile Preseli Beast saw 65 runners starting. Marcus Pinker from MDC was out on his own from the start finishing in 3hrs 28mins, and a clear 23 minutes ahead of Swindon runner Richard Newman in second. First overal female was Jane Ward, Dorset Doddlers, (F45!) who was competing in one of her first fell races! Obviously a natural and one to watch out for on the fell running scene. Second overall female was St Dogmaels runner Sarah Tagg, who also received first local lady. First local male and 1st M50, was Rhedwyr Preseli runner Richard Thompson who was fourth overall in 4.07.26. 1st Open female winner was Rhedwyr Preseli runner, Rosie Thomas. Rosie was actually leading female coming over the last top, but struggled on the long descent back to the finish. MDC took home the male team trophy as their three runners were 1st, 8th, and 9th. 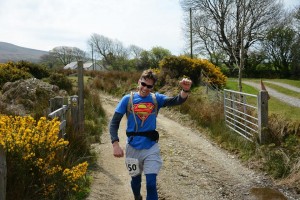 In the Beast Bach race, an amazing 184 runners toe’d the line! 30minutes before the start there was still a large queue for registration, and I was starting to wonder if they’d all get their race numbers in time, but it was alright. After my briefing and a quick hug to send them on their way I looked up the road as they set off, and the whole road was flooded by runners! They even got an escort from Sarah Eynon in her work quad! Hope you weren’t speeding Sarah!

Gareth Payne(M40) from Sarn Helen club, Lampeter had gained a good lead even by the time he reached Rosebush quarries. He must have been a little scared of the Beast as he managed to pip the record set by his club mate last year by a minute as he crossed the line in 1.18.04. A super fast time over this 11 mile ‘hilly’ course. Gareth was 7mins ahead of 2nd placed Arthur Camps who was one of the 11 Dutch who had travelled over for the race. And I thought there were no hills in Holland? 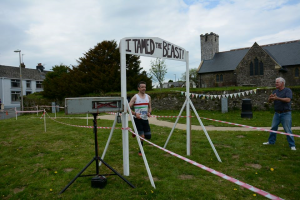 First female overall, and 1st local was Ltr coaching runner, Celia Boothman of Narberth(F35) in a time of 1.36.17. She was closely followed by Lottie Chant of St Davids. Aled Morgan from Eglwyswrw was first local and 11th overall. Oldest female was 71yrs old, whilst oldest male was 64yrs old!

The overall female and male winners of each distance took home a Salomon race which was kindly sponsored by Cotswolds outdoors, Carmarthen. They also provided an energy gel, and a discount voucher for each of the goody bags. Thank you Cotswolds. 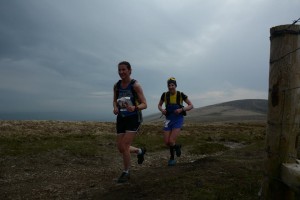 A huge thank you has to go to all the sponsors of the Race. Etts electrical sponsored the race numbers, The Globe, and Fishguard chiropractor clinic helped sponsor the T-shirts, Cor Harmo-Ni helped sponosor the slate coasters, whilst there were many sponsors of the trophies, and the goody bags. Thank you to you all.

Jacob Martin was busy on the day as he was rushing around various points of the course taking videos. His “The charge of the Beast tamers” video is his end result. Thank you also to Refreshing North Pembrokeshire for their support in publicity and promotional items towards the event. Diolch.

Many thanks to Ubershoot photography  who were busy snapping away all day at various points. Please take a look at their photos that they have for purchase.

Thank you to Bluestone brewery for your spot prize of beers.

Here are just some of the comments I’ve received from many of you lovely runners.

“Just a quick message pal, the event was a credit to you, one of the cheapest ultras I have done, but by far the toughest, all the marshals were spot on, the course was well marked out and only a pure muppet would get lost, definitely will be back next year but I’ll be getting more runs done up the preselis first! Again, thanks to yourself and all the team.” Local UB runner

“Thanks to all the organisers and Marshalls today. What an amazing event and well organised. Definitely coming back next year for the Beast. Thoroughly enjoyed. Toughest run I’ve ever had the pleasure of doing… loved it.”

“Would just like to say thank you for putting on such a great event. The route was amazing, the best running event I have done. Big shout out to the marshals out on the course, and I will be back next year….once my legs recover. Thank you again!”

“Thank you so much for such an amazing day on Saturday. Never in my life have I been so challenged and loved every minute of it. I can’t believe it’s all over and we have to wait another year to do it again!”

“All of us did enjoy the race very much and we want to thank you for that. I do hope to be back next year!” The Dutch group!

“A big thank you to the organisers and helpers of the Preseli Beast run 2016. It was a great day and tough course. The route marking, helpfulness and encouragement from the marshals was superb. I look forward to seeing the results and any photos anyone may have got. Ubershoot seem to have missed me crawling across the finish line!”

“Thanks for an awesome race on Saturday, it was amazing, really loved it!! Top event.” Female winner of PB

“Thanks for organising a fantastic race. It’s great to see the local community so involved and you are a very relaxed race organiser! All of the little touches make it such a brilliant event; the cawl, cakes, drummers, the finish barrier, and the course are all excellent. A great race, and will be back next year!”   “Thanks Carwyn, and everyone.” PB runner from Frome.   “Just a small thank you for the most wonderful day on Saturday. The whole thing was magical and I’m still buzzing. It was so well organized, well done to you and your army.”   “This event has more soul, community spirit and camaraderie than all the commercially driven events in Pembrokeshire put together. Do yourself a massive favour and enter next year! Carwyn will even give you a hug on arrival :)”   “I ran the Beast Bach on Sat, and just thought I’d let you know I really loved it despite it being a tough course, and I was left with only 1 leg!

You should be proud of the event you’ve created and so should your helpers, marshals, tea and cake ladies, and in fact the whole village showed a huge enthusiasm in supporting a load of strangers staggering through their streets. I wrote a quick review on my blog (and nicked some photos from your website as I didn’t have a camera so I hope you don’t mind)  https://bluegreengoldgreytrails.wordpress.com/2016/05/08/ahhh-so-thats-why-they-call-it-a-beast/

Cheers again for a great day and event, hope to run the full beast next year!” Mr Davies

So, just like that, it’s over for another year for the Beast. There are other smaller races that I organise too, so please check out the other races section.

Since Beast day there have been a few suggestions of a double UltrabeasT, a winter Beast, and little Dave wants to incorporate ‘The Hill’! If you think the Beasts Back was steep enough then it’s just a teaser to what’s around the corner!!! A proper ‘Sting in the tail’! But we’ll see!!!

One last thing, and that’s to say a big huge thank you to you the runners, my family and friends, and most importantly Rachel, for putting up with my craziness for creating this ‘little’ Beast.